Start a Wiki
The Warminster branch was a former Little Chef restaurant located at the junction of the A36 and A350 near Warminster, Wiltshire.

Warminster Services opened in 1992 and was positioned just off a roundabout serving the A36 and A350 roads. Roundabout sites were always great places to build service stations at as they provided easy access to all routes and were also easily spotable. Warminster was built by Motorway Services giant Granada as part of their plans to conquer the A-roads with scaled-down motorway-style sites. Others included Blyth (A1), Musselburgh (A1), Markfield (A50), Colsterworth (A1), Saltash (A38) and their older site at Monmouth (A40). All of the other service areas opened before Warminster, making it the newest proper A-road service station today. These each had a Granada Country Kitchen restaurant, shop, small arcade area, lodge and fuel forecourt. In the early 90s, Granada decided to replace the restaurant at all A-road sites, with the exception of Blyth, with AJ's Family Restaurants who it had done a deal with. This gave them a direct rival to Forte's Little Chef brand for the first time. They then added Burger King to all sites.

However, in 1995 Granada got their hands on rival chain Forte and this gave Granada control of Forte's well established roadside brands. By 1996 the AJ's at Warminster became a Little Chef and its lodge a Travelodge. Subsequent owner changes around 2000 then saw Granada merge with Compass and demerge again leaving Compass with the roadside portfolio. In 2002 Compass then passed Little Chef and Travelodge onto Permira of Canada. However, Granada, now called Moto, kept Little Chef, BK and Travelodge at Warminster as part of a franchise agreement.

Unlike other Granada A-road service stations, Warminster was the only one to have been built on a single carriageway and although the A36 is a busy road running through Wiltshire, Warminster services never quite attracted the traffic levels it would need to demonstrate its need for a large building. In addition to this, other Granada service areas were packed with high street names; however, Warminster struggled to contain anything other than a Little Chef.

In 2017, Euro Garages took over the Little Chef chain and throughout the year, a majority of the restaurants were converted into brands such as Starbucks and Subway. By January 2018, only half of the Little Chef restaurants remaining were converted, leaving around 35 to 40 Little Chefs still trading. Due to Euro Garages being unable to use the Little Chef name after 31st January 2018, they had to think of an option to quickly convert the remaining restaurants. This was when EG Diner was born and Warminster was one of the first of these to open. However, the EG Diner closed in August 2018 and was later replaced with Greggs, alongside a newly refurbished Burger King, Subway and Sainsbury's On The Go store. 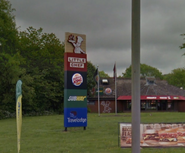 Little Chef Warminster in 2017. The entire restaurant was given a retro makeover during the previous year.
Add a photo to this gallery
Retrieved from "https://littlechef.fandom.com/wiki/Warminster?oldid=8162"
Community content is available under CC-BY-SA unless otherwise noted.