Start a Wiki
The Swindon branch was a location open from 1996 until 2006, situated on a roundabout of the A419. It was also sometimes called Blunsdon, since it was also near to the village of Blunsdon.

By 1997, all Happy Eater locations would be renamed to Little Chef, meaning the Swindon location was only Happy Eater for a year at the maximum.

The land was compulsory purchased by Highways England in 2006, with the Little Chef closing on the 1st of November and was completely demolished. The land was used to construct the Blunsdon Bypass, meaning the roundabout being converted into a new £65.5m project including a bridge and new road. This would allow improved traffic flow, which was known to have been a problem before the closure, as well as taking traffic away from the village of Blunsdon, which was badly effected by noise. The closest Little Chef would then be Cirencester.

The current location where the restaurant used to stand is now part-grass verge and part-road. A Harvester and Aldi were opened nearby in 2011, as well as a new pub in 2014. 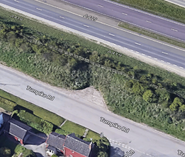 The remains of the site.
Add a photo to this gallery
Retrieved from "https://littlechef.fandom.com/wiki/Swindon?oldid=8151"
Community content is available under CC-BY-SA unless otherwise noted.