The Stowmarket branch was a former Little Chef restaurant located on the westbound side of the A14 near Stowmarket, Suffolk.

Opened in 1985/86, Stowmarket Little Chef served the northbound side of the A45 (now A14) between Ipswich and Cambridge. From the kickoff, it had a neighbouring filling station and, a few years later was joined by a Forte Travelodge. In 1994, the A45 between Cambridge and Felixstowe was re-numbered the A14 following the opening of the A14-M1-A1 link.

By 2007/08, the filling station ceased trading, leaving just the Little Chef and Travelodge to soldier on alone.

In 2008, the original A14 was bypassed by a new dual carriageway which became the new A14. The reason for this was because the original A14 was of poor quality, with a number of right turns across the carriageways and a suitably reduced 50mph speed limit. The new road took traffic away from the Little Chef, meaning that the site was a lot quieter and didn't experience as much custom as before. However, all was not lost as a new grade separated junction was built near to the restaurant and the junction displayed signage which made passing travellers aware that the Little Chef and Travelodge were both still trading, therefore they soldiered on happily. The old A14 was renamed Tot Hill

However in 2012, the Little Chef at Stowmarket ceased trading as it was one of 67 sites decided by then owners, RCapital, which was deemed to be unsuccessful, therefore leaving the Travelodge to soldier on alone.

As of 2020, nothing has ever replaced the Little Chef. However, in previous years, there were plans for a church to replace the restaurant, however: planning notices were later taken down, suggesting that this plan has probably been scrapped.

Despite the Little Chef now being closed, the nearby junction still displays Little Chef signage, therefore making it confusing to travellers.

Stowmarket in 2017. Some of this restaurant's external signage still remains to this day. 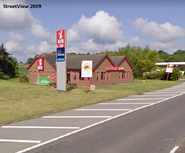 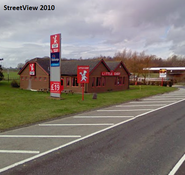 Google StreetView in 2011
Add a photo to this gallery
Retrieved from "https://littlechef.fandom.com/wiki/Stowmarket?oldid=8748"
Community content is available under CC-BY-SA unless otherwise noted.