The Oswestry branch was a former Little Chef restaurant located at the junction of the A5 and A483 at the Mile End services near Oswestry, Shropshire.

The Little Chef first opened in 1987 and replaced the Whittington branch (located a few miles away on the original A5 (now B5009)). Whittington had fallen victim to changes to the road network to the west of Oswestry and had now found itself bypassed by a new road known as the Oswestry Bypass which was a re-route of the A5. With the original A5 being much quieter than the new A5 and the road carrying hardly any traffic, Whittington Little Chef didn't receive very many customers and shut up shop as it didn't meet expectations in terms of profit. Forte reacted by finding a site on the new Oswestry Bypass and chose the site at Mile End Services, Oswestry, beside a filling station. The Mile End services were positioned next to a roundabout, making them easily accessible and visible to all traffic.

Compared to Whittington, Mile End Services was a much larger site, sporting the quadruple combination of Little Chef, Travelodge, filling station and tourist centre. The Little Chef had the house design of the era with the pitched roof, double front and red bricks and was attached to a much larger building with a Tesco-like design which sheltered the tourist centre and had walkways connecting the Little Chef and Travelodge.

In the Granada era, the site was joined by a Burger King restaurant. Despite other closures of Burger Kings at Little Chef sites the Oswestry Burger King has survived to this day.

In 2002, the Little Chef recieved the "New Choices" Makeover, giving it some smart new furniture and access to exciting menus from Harry Ramsdens, Upper Crust, Wiseguys Pizza and Caffe Ritazza. Nowadays it trades again as a standard Little Chef, but quite a smart one.

In 2006, the branch was one of many Little Chefs to be joined by a Coffee Tempo outlet. However, this was short-lived and was removed by 2009.

Following the takeover by Euro Garages in 2017, Oswestry was one of a number sites converted to an EG Diner in January 2018. This is due to the expiration of Euro Garages' right to use the Little Chef brand name. These sites are likely to be re-branded as another brand at a later date.

In October 2018, all remaining EG Diners closed down including the branch at Oswestry. The Burger King still trades as a standalone however the Little Chef restaurant now lies empty and abandoned. 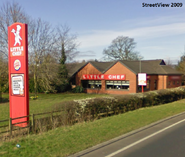 Google StreetView in 2017
Community content is available under CC-BY-SA unless otherwise noted.
Advertisement