Start a Wiki
The Musselburgh branch was a former Little Chef at the Musselburgh Service area on the junction of the A1 and A720 Edinburgh City Bypass.

Originally opened in 1989 by Granada, the services was part of their plan to grow their representation on the A-roads. By being a mini motorway style site at a major A-road junction, Musselburgh was one of 6 new Granada sites to follow this format. Facilities on opening would include a restaurant, shop, lodge and filling station.

Musselburgh's opening co-incided with the completion of the A720 Edinburgh City Bypass and A1 Musselburgh bypass, so was chosen to be built at the intersection between the two. A logical stopping point having beaten/ before tackling the Edinburgh traffic!

Around 1992, in response to Forte successfully rolling out Little Chef at many of its A-road sites, Granada decided to introduce a similar concept and did a deal with AJ's Family Restaurants, a Little Chef rival. Under franchise agreement, An AJ's was opened at Musselburgh offering waitress service and a similar menu to a Little Chef.

Granada would close the shop by the mid 90s, instead directing customers to the filling station. In it's place, a Burger King was added to the main building in 1994/5.

The first change in ownership occured around 2000-2002, when Granada merged and then demerged with Compass Catering in order to change the company's focus to solely media. This left Musselburgh in the hands of Compass, who then again sold Little Chef and Travelodge to Permira of Canada. As a result, the site ended up in a confused state of ownership where Moto Hospitality (the new name of Granada's ex roadside business) retained some but not all ownership.

However, by 2010, the plug was pulled on the Little Chef at Musselburgh. The company's new owners R Capital, a venture capital firm, decided to slim down the portfolio of restaurants with Musselburgh being a casualty. Their reasoning behind the closure was that the site was underperforming in comparison to other Little Chefs. It is speculated that this may have been the case in part due to the rent set by Moto, or perhaps due to the popular Little Chef at Dreghorn only being 7 miles down the road.

Today in the 2020's, the restaurant still lies empty, with only the Travelodge and filling station still trading. Dreghorn's Little Chef has also gone too - leaving the Edinburgh City Bypass with only a Starbucks to serve travellers in need of food.

Although the Forte numbering system was continued by Granada until 1998/9, Musselburgh Little Chef was never given one. It has therefore been given the hypothetical number 514, which is in keeping with other sites that opened around this time. 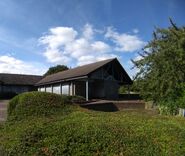 The former Little Chef portion of the building, as it was in September 2019
Add a photo to this gallery
Retrieved from "https://littlechef.fandom.com/wiki/Musselburgh?oldid=8260"
Community content is available under CC-BY-SA unless otherwise noted.