The Markham Moor South branch was a Little Chef restaurant located just north of the busy Markham Moor junction on the A1 near Retford, Nottinghamshire.

The site was built in the 1950s by Lincolnshire architect, Sam Scorer who designed Markham Moor as a petrol station with an elaborate and distinctive parabolic roof.  At this time, there was no building underneath the parabolic roof and just petrol pumps. Scorer also designed a similar structure for a garage in Lincoln which is still standing too.

However, tragedy almost struck. In the mid 2000s, the Little Chef was under threat as there were plans to replace the old Markham Moor roundabout with a grade separated junction. After much debate and considerable petitioning, the building was luckily saved and remained open when the new junction opened, accessed instead from the southbound sliproad for the junction. Sadly, the Little Chef didn't last for much longer.

In February 2012, Little Chef's journey came to an end at Markham Moor South when then owners R Capital decided to close 67 sites to focus on the more profitable core estate. Ironically, less than 3 months after it closed, Sam Scorer's parabolic roof structure at Markham Moor was awarded Grade 2 listed building status by English Heritage, The building was deemed to "Hark back to the time when driving was still an adventure" while the roof design was considered "architecturally innovative using technology that was cutting edge". It was stressed that the listing only applied to the roof structure and not the building beneath it but it could have seen some serious promotion and funding coming Little Chef's way if they had stuck it out. 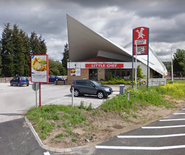 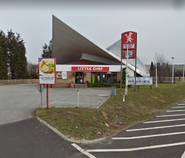 Google StreetView in 2011
Community content is available under CC-BY-SA unless otherwise noted.
Advertisement