The Markfield branch was a former Little Chef restaurant located at Markfield service station located at junction 22 of the M1 motorway on the A50 near Leicester, Leicestershire.

The site was built in 1989 by Granada as a proper service station on the A50 and M1. At this time, Granada, having seen Forte do it successfully, were trying to increase their presence on non-motorway routes and in the late 80s they opened 6. In addition to Markfield there was Musselburgh, Blyth, Colsterworth, Warminster and Saltash. These were essentially scaled down motorway sites all with a Country Kitchen restaurant, Granada Shopping, Granada Lodge and filling station. Markfield was a bit of a strange case though. Despite being located off a busy motorway junction (22) on the M1, it never gained signage from the M1. However, given its small size, it is questionable whether Granada ever intended it to be a proper motorway site, especially given that Leicester Forest East is so close. Given that this was the era of experimentation, it seems feasible that Granada took the A50 to be a good enough source of traffic with some potential M1 overspill from those in the know.

By 1993, Granada, having looked at the success of Little Chef, particularly on the A-roads, were keen to offer their own version and a deal was done with Little Chef rival AJ's to bring a waitress service restaurant to 9 of their sites including Markfield. AJ's Family Restaurants therefore replaced the Country Kitchen. In 1994/5 a Burger King was added alongside the AJ's.

However, this was short lived and was gone by 2011, leaving the Burger King to trade alone as the only restaurant. By this time the site had also become quite run down and it saw trade really dropping off. One potential reason for this was the construction of a new A50 dual carriageway further north of J22 by 2000/01, meaning that less traffic and crucially less long distance traffic was now passing the site.

By 2012, Moto had pulled out of the site and Euro Garages took it over. The Burger King closed by 2014, leaving just the Travelodge and filling station to soldier on alone. The main building closed soon after. The forecourt then closed in 2020.

Even though the main building is now shut, the site is still a great place for meeting venues. There is also a small picnic area on site.

Since its closure, the interior of the services became flooded and mould started to grow on the walls and the wooden partition. The Burger King furniture and posters still remain in the services to this day. As of March 2018, the main building was fenced off.

Despite being created while they were still active, the Little Chef was never allocated a number in the Forte numbering system. Thus, in keeping with other sites of the era, it has been allocated 515

This was the restaurant space of the old Markfield Little Chef 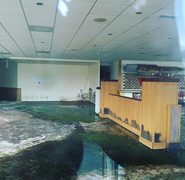 Markfield Services in 2016, completely flooded to say the least 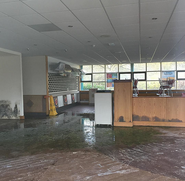 The former Burger King at Markfield in 2016. A lot of the furniture and posters still remains to this day

The derelict Little Chef at Markfield in 2017.
Add a photo to this gallery
Retrieved from "https://littlechef.fandom.com/wiki/Markfield?oldid=9428"
Community content is available under CC-BY-SA unless otherwise noted.