The Ings branch was a former Little Chef on the A591 in Cumbria.

Opened between 1977 and 1980, the Ings Little Chef was the second to be built on the road with older branch Staveley already in full flight just a few miles south (although it closed between 1985 and 1986).

The Ings branch was located in an attractive chalet-style building which it shared with the neighbouring filling station and a car showroom. The restaurant was one of the smaller branches with only a handfull of tables. However, given the popularity of the Lake District, it was well located for the tourist traffic.

In 2004, then owners Permira of Canada put around 131 Little Chefs up for sale with Ings one of the casualties. Although several re-opened under new owners in 2005, Ings was sadly not one of them. However, it did re-open as an independent outlet called Lakewinds Diner although this was gone by 2009.

By this time, Little Chef had another new owner, R Capital, and the restaurants were headed up by Ian Pegler, who had previously headed up Little Chef in the latter Forte days. Pegler was on a mission to grow numbers and to look at some of the former sites which may still be profitable. In 2008/9 he set about re-opening 5 branches, one of which was Ings. As part of the Lakewinds ownership, the site hnuad been quite nicely refurbished inside so all Little Chef needed to do was apply their branding and some paint and all looked great.

Sadly, a few years down the line and with a nvew MD in place R Capital decided to close 67 Little Chefs that it considered to be underperforming and, for the second time, Ings found itself on the closure list. It closed in 2012.

Google StreetView in 2009. The totem is much shorter and more unusual-looking than normal. 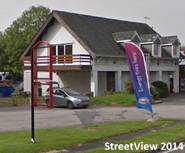 Google StreetView in 2014
Add a photo to this gallery
Retrieved from "https://littlechef.fandom.com/wiki/Ings?oldid=8775"
Community content is available under CC-BY-SA unless otherwise noted.