Halkyn was a former Little Chef on the northbound A55 dual carriageway near Flint in North Wales.

Opened between 1980 and 1982, this is one of the more distinctive Little Chefs in the network for many reasons. Firstly, it is built of local stone, setting it apart from any other site of this era while its design with a huge bay window at each end is quite unlike any other.

It is also set higher than the road, facing out over the River Dee Estuary, making for a scenic view whilst dining.

However, perhaps one of the most distinctive features of the restaurant is its signage. Unlike any other Little Chef on the network all its signage, bar the "Charlie" logo, is blue and not red.

This dated from a trial period, instigated by Forte towards the end of its reign in the mid 90s. In a bid to try and attract more evening diners, especially from the lodges, and a young professional clientelle, certain restaurants were given an internal makeover with new carpets, tables, chairs, softer lighting, blinds and higher quality partitions and kitchen areas. They were also treated to air conditioning. Basically more of a restaurant experience! These restaurants were also given blue branding on the outside to set them apart. It is unclear whether the blue signified that the restaurants were a new concept, whether it was chosen to set apart those that were air conditioned or whether it was part of a plan by Forte to rebrand the whole estate. Certainly crockery and even the lightshades introduced to restaurants across the whole estate in the mid 90s had blue detailing on them.

However, once Granada took over, most restaurants that were changed under the trial reverted back to the red branding with only a few remaining. Halkyn was however one of few branches to keep the blue branding.

Therefore, there was another Little Chef restaurant operating in Flint (182) near the Coleshill Filling Station on Holywell Road at the time when this one officially opened, but later closed in the late 1990s and has since been taken over by several independents over the years. It is currently operating as a photography specialist shop known as 'Photography by Morgan'.

In terms of facilities, Halkyn gained a Little Chef lodge, later to be rebranded Forte Travelodge, in 1988 and a Little Chef Coffee Stop in the early 90s. Although this latter concept was discontinued by Granada around 1996, Halkyn still retains a small seating area at the entrance to cater for such an audience.

Halkyn's newest totem from the early 2000s, in 2011. Both totems were used at the same time around then.

One of the remaining 'minimilk' lamp posts in 2016. 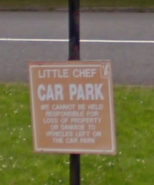 Halkyn in 2018, with the site under renovation.
Add a photo to this gallery
Retrieved from "https://littlechef.fandom.com/wiki/Halkyn?oldid=8253"
Community content is available under CC-BY-SA unless otherwise noted.