The Feering branch was a former Little Chef restaurant located on the northbound side of the A12 near Kelvedon, Essex.

Forte first got their hands on the building between 1986 and 1988, taking over what was previously an independent roadside cafe, and wasted no time in turning into a Happy Eater restaurant. At this point the A12 between London and Ipswich was already pretty well served with Little Chefs at Capel St Mary, Widford, Springfield and Rivenhall so it made sense to increase representation of their other brand. The Happy Eater opened in a large building with light coloured bricks and a chimney sticking out of the roof. It also sported a weather vane with the Happy Eater logo.

Around 1993, Forte decided to convert most of their Happy Eater restaurants into Little Chefs as they discovered that out of the two brands, Little Chef was the brand which made more money. Feering received the treatment in 1996/7, by which time Granada had taken over Forte and were finishing the conversions. Granada had also added a Travelodge to Feering by 1998, giving it the winning combo of restaurant, filling station and lodge. A great crowd puller!

In October 2014, the Little Chef was joined by a Burger King, giving the site a boost in terms of facilities. It also received a major refurbishment similar to the 'Wonderfully British' design. This saw the introduction of new branding at the site, along with bright red furniture and the famous blue sky ceiling. The old Happy Eater weather vane was also removed from the chimney.

In 2017, Euro Garages took over the Little Chef chain and throughout the year, a majority of the restaurants were converted into brands such as Starbucks and Subway. By January 2018, only half of the Little Chef restaurants remaining were converted, leaving around 35 to 40 Little Chefs still trading. Due to Euro Garages being unable to use the Little Chef name after 31st January 2018, they had to think of an option to quickly convert the remaining restaurants. This was when EG Diner was born and Feering was one of the first of these to open. However, the EG Diner at Feering closed in August 2018. As of 2019 the building is now the home to a newly refurbished Burger King and a Greggs outlet. 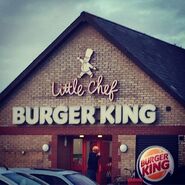 Feering Little Chef after the refurbishment in 2014.

Google StreetView in 2018 during the site refurbishment to gain a Greggs store
Community content is available under CC-BY-SA unless otherwise noted.
Advertisement