Fat Charlie is the cheery mascot of the Little Chef chain.

Charlie is the most recognisable feature of the Little Chef brand. He could be easily spotted on service station totems at restaurants - smiling and greeting any customers coming to dine at a Little Chef.

He also made appearences in adverts for the chain (both as a cartoon and live action character), and on various pieces of merchandise made to promote the brand.

Charlie is a small, plump chef (hence the name Little Chef) with a large smile on his face. On the Little Chef logo, he stands in front of a red background, carrying a tray and wearing a chef's hat.

Over time, there became a variation of Charlie logos at Little Chef restaurants. Up until the chain's demise in 2018, most Little Chefs featured a 1990s Charlie design as their logo. This was because this logo was used for a long period of the chain's history - up until the early 2010s. However, Little Chef restaurants refurbished after 2011 gained a 2011 Charlie design as their logo. A noteable exeption to this was Warminster, which gained a 2016 variant of Charlie when it was refurbished that same year.

Despite the chain no longer being around, there are mant remnants of Charlie still dotted around the country at former restaurants.

Born in 1958, Charlie started out as a very plump chef and differs to other Charlies on Little Chef logos. This Charlie is seen carrying a very large tray and wearing a large chef's hat. This Charlie is very special as it has many differences to other Charlie's: the eyes are facing towards the tray, there is no neckerchief on the clothing, the smile is very faint and there is no outline of the body. A Charlie that sadly no longer exists today as it has been replaced by a more modern one. Reading, Camberley and Bagshot are examples of Little Chef restaurants that had this logo.

A large difference in this Charlie compared to the first one. The iconic Little Chef is seen to be a lot smaller than the first one, a lot less plump and carrying a much smaller tray. The chef's hat also has a different design. The eyes are focused on the person rather than the tray, there is the addition of a neckerchief, the smile is more happy and the tone in red is different too.

Not much of a difference with this Charlie. In the 1980s, the words 'Little Chef' were added to the logo and positioned below Charlie. This Charlie could still be found on quite a few buildings and signs at sites such as Honiton, Bardon Mill and Uttoxeter. Charlie has the same tray, hat, clothing and face as the previous logo.

A little bit of a change with this Charlie. The eyes are slightly different than the old Charlie. The  writing also has a different font. The tone of red is slightly darker too. This Charlie was used on most Little Chef signs on buildings and totems. Only the refurbished restaurants have had a change to the Charlie.

A massive change to this Charlie. The face has a different, more cheery smile and oval shaped eyes. The chef's hat also has a different design and the neckerchief has been replaced by a proper chef's jacket. Charlie also lost his tray and instead waves his arms out to greet customers to Little Chef. This Charlie could only be found on logos of refurbished restaurants . The font of the writing is also different with loopy writing rather than the block font.

The final incarnation of Fat Charlie and the Little Chef logo. This version was used on social media accounts for the chain until it's demise, and was introduced to a refurbished Warminster in 2016. This Charlie is based on the 2011 logo, but re-utilises some of his classic features like his platter and "muffin-esque" chef's hat. The written "Little Chef" logo also makes a return to it's classic blocky font. 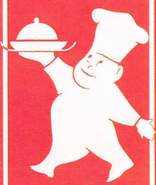 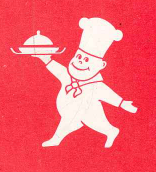 Fat Charlie in his final appearance in 2016
Add a photo to this gallery
Retrieved from "https://littlechef.fandom.com/wiki/Fat_Charlie?oldid=8281"
Community content is available under CC-BY-SA unless otherwise noted.