The Emsworth branch was a former Little Chef restaurant located on the eastbound side of the A27 near Emsworth, Hampshire.

Opened in 1993/94, the Little Chef at Emsworth replaced a former branch at Nutbourne, located to the east of Emsworth on what used to be the original A27 (now A259). Nutbourne had fallen victim to changes in the road network between Havant and Chichester and had now found itself bypassed by essential long-distance traffic. As a result of this, Forte reacted by finding a site on the new A27 bypass in order to keep Little Chef's presence in the area as Nutbourne was the only Little Chef to have operated between Portsmouth and Chichester. They chose a small site on the eastbound side of the A27 near Emsworth, beside a filling station and Travelodge hotel. This meant that it could continue to serve traffic, mostly consisting of holidaymakers and long distance travellers, between Portsmouth and Chichester on the new South Coast Trunk Road.

Unlike most other Little Chef and Travelodge sites, where the buildings were typically separate, the buildings at Emsworth were joined together by a small corridor, meaning that both restaurant and hotel could be accessed from the same entrance.

The site continued to trade well until 2012 when then owners R Capital decided to close 67 sites that it deemed to be underperforming with Emsworth identified as one of these. By the end of July, it had closed its doors, leaving Travelodge and filling station to soldier on alone.

Unlike most other sites which closed in 2012, the signage at Emsworth wasn't removed, making it confusing to travellers.

However, in a bid to grow their roadside presence, Starbucks took on the former Little Chef, reopening it in 2016 as the Starbucks branch that it trades as today from the same building. 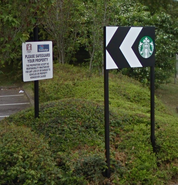 A Little Chef/Travelodge security notice and Starbucks directional signage in 2016.
Community content is available under CC-BY-SA unless otherwise noted.
Advertisement