The Dumbarton branch was a former Little Chef on the A82 at Gate Services to the east of Dumbarton.

Opened in 1982-1984, this replaced a former branch at Clydebank, further east along the A82 towards Glasgow. Clydebank had fallen victim to changes to the road network through and to the west of Glasgow and had now found itself bypassed by essential long-distance traffic, being on the wrong side of the Erskine Bridge junction. Forte reacted by finding a site on the better side of this junction and chose the site at Gate Services, Dumbarton, beside an Esso Filling Station. This meant it could continue to serve the west coast route from Glasgow to Inverness.

In 1988, Forte added a Little Chef Lodge to the site, making it the second Little Chef in Scotland to get one after Gretna. This gave Little Chef their perfect "triple threat" line up. The lodge later became a Travelodge when Forte acquired the brand.

The site continued to trade well until 2012 when then owners R Capital decided to close 67 sites that it deemed to be underperforming with Dumbarton identified as one of these. By mid January it had closed its doors, leaving Travelodge and filling station to soldier on alone.

However, in a bid to grow their roadside presence, Starbucks took on the former Little Chef, reopening it in 2013 as the Starbucks branch that it trades as today from the same building. 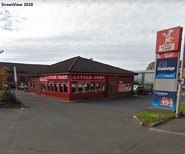 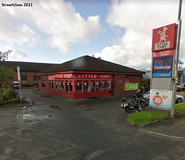 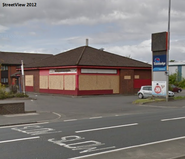 Google StreetView in 2012
Add a photo to this gallery
Retrieved from "https://littlechef.fandom.com/wiki/Dumbarton?oldid=8580"
Community content is available under CC-BY-SA unless otherwise noted.