The Beacon Hill branch was a former Little Chef restaurant located at the junction of the A14 and A140 near Ipswich, Suffolk.

The site was first built in the late 1980s by Little Chef's rival chain, Kelly's Kitchen, and was located at the junction of the A45 (now A14) and the A140 just outside of Ipswich. The site was a joint venture between a brewing company, who operated the restaurant, and Petrofina, an oil company who operated the forecourt. This was one of only 18 Kelly's Kitchens/ Petrofina sites operating across the UK. Kelly's Kitchen restaurants were very distinctive, housed inside of buildings with an overhanging roof, cottage styled windows and a large funnel-like chimney built into the site and the roof.

In 1989/90, Forte were eager to expand the Little Chef portfolio and therefore decided to acquire the Kelly's Kitchen chain and rebrand all 18 restaurants as Little Chefs, resulting in a rival brand being removed from the roadside. By 1992, Forte had added a Travelodge to the site in order to cater for tired travellers. In 1995, a Forte Coffee Stop was added to the restaurant in order to cater for those on the move. However, when Granada took over Little Chef from Forte in 1997, a Burger King replaced the Coffee Stop.

In the 90s, the A45 between Cambridge and Felixstowe was re-numbered the A14 following the opening of the A14 M1-A1 link.

In 2015, the Little Chef at Beacon Hill, like many others, received a minor refresh where most of the existing furniture was replaced, most notably the tables and chairs.

An interesting feature of Beacon Hill services was a sign by the exit which indicated that the next Little Chef was 7 miles away at Stowmarket. However, this was removed in 2012 when Stowmarket ceased trading, but wasn't removed completely until 2015/16 because the Burger King logo replaced the black text. 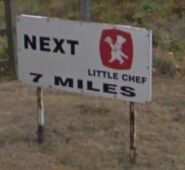 This sign tells drivers that the next Little Chef is located approximately 7 miles away. However, it was removed by 2012 when Stowmarket site ceased trading, and was replaced with Little Chef & Burger King directional signage. 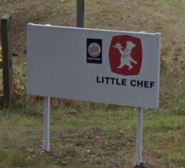 One of the site's totems in 2019. Unlike other restaurants converted into EG Group sites, where the totems were replaced with EG Group branded ones, this totem still features the original remains from when the Little Chef was in operation.

Google StreetView in 2016
Add a photo to this gallery
Retrieved from "https://littlechef.fandom.com/wiki/Beacon_Hill?oldid=9020"
Community content is available under CC-BY-SA unless otherwise noted.