The Appleby branch was a former Little Chef restaurant located on the A66 near Appleby, Cumbria.

The Little Chef first opened between 1972 and 1976 and was originally referred to as the Ketland Moor branch before changing its name to Appleby in the 1980s. The building it was housed in made it one of the smallest Little Chefs in history.

The restaurant was situated on the scenic A66 with large windows facing south west, giving fantastic views across the Yorkshire Dales and the Lake District. It was a well run restaurant and won many awards for the quality of its operations.

In February 2012, then owners R Capital announced the closure of 67 branches that were underperforming and sadly Appleby was on the list. One such explanation could be that the restaurant, although on a piece of single carriageway road, was difficult to access for northbound traffic. This was due to a central barrier between the 2 lanes, meaning users had to drive to the next junction and double back.

Happily, this was not the end of the restaurant which has now opened as an independent, managed by an ex member of staff. 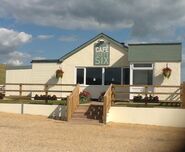 Appleby Interior.
Add a photo to this gallery
Retrieved from "https://littlechef.fandom.com/wiki/Appleby?oldid=6046"
Community content is available under CC-BY-SA unless otherwise noted.